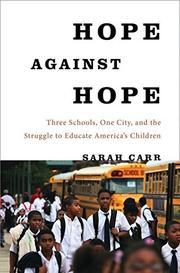 Three Schools, One City, and the Struggle to Educate America's Children

Deftly weaving in background on the abysmal historical performance of New Orleans public schools and the strong focus on discipline and routine of charter schools aimed at preparing students for college, the author shows how the charter approach is working on the ground through the eyes of individuals in three randomly selected schools: 14-year-old Geraldlynn Stewart, who struggles to find her way as a high school student; Aidan Kelly, a 24-year-old teacher and Harvard graduate who sees his school as an academic boot camp; and Mary Laurie, veteran principal of one of the first schools to reopen after Katrina, who asks students, “Would you come along with me on this journey?” Their closely reported experiences in schools of the national chain KIPPS (Knowledge Is Power Program) illustrate the issues, challenges and satisfactions of the demanding, no-excuses charter way. Like the other charters, Sci Academy, where Aidan teaches, emphasizes success on standardized tests; it is “a technocrat’s dream: run by graduates of the nation’s most elite institutions, steeped in data, always seeking precision, divorced from the messiness…of democracy.” With their missionary zeal and outsider status, its young teachers “resemble the settlement house workers of a century ago,” writes Carr. Principal Laurie hopes her students will journey on to college; Geraldlynn’s parents, too, hope the new charter schooling will open a longed-for door. While often repetitive, the book evokes the realities of a city school system in transition. The schools are improving and test scores are up, she writes, but only college graduation rates in future years will tell whether charters make a difference.