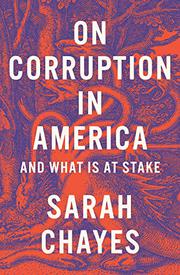 ON CORRUPTION IN AMERICA

And What Is at Stake

Anyone who has followed the outbreaks of COVID-19 at U.S. meatpacking plants may find one fact in this book especially chilling: In the anti-regulatory spirit of the Trump administration, the Department of Agriculture levied on such facilities one-tenth of the fines in 2018 that it had imposed in 2013 for rules violations. Chayes casts the slashed penalties as evidence of an alarming trend: America is turning a blind eye to the corruption of kleptocratic elites who—with an audacity unseen since the Gilded Age—enrich themselves through public- and private-sector (if not outright criminal) alliances. In an intermittently enlightening but digressive mix of history, analysis, and polemic, the author shows how the fat cats consolidate their power partly by shuttling among jobs at universities, government or nonprofit agencies, and corporations or top-tier law firms like Jones Day and Kirkland & Ellis. Moving from John D. Rockefeller’s era to the present, Chayes serves up some piquant details and anecdotes—e.g., one involving Supreme Court Justice Brett Kavanaugh’s clerkship for Anthony Kennedy: “This is the same Justice Kennedy whose son Justin was President Trump’s loan officer at Deutsche Bank, and whose early retirement gave Trump a surprise Supreme Court slot to fill.” Much of the story of how the U.S. sank into this ethics maw has been told before—see Jane Mayer’s Dark Money, Nancy MacLean’s Democracy in Chains, and Zephyr Teachout’s Corruption in America—and Chayes’ effort to update the tale belabors metaphors from the Bible and Greek mythology and wanders far afield to Nigeria, Afghanistan, and elsewhere. Ultimately, however, this book supports the view of a federal prosecutor who told Chayes that today, “only bad criminals can get convicted”: “And I don’t mean dangerous criminals. I mean people who are just really bad at being corrupt.”

A rambling but sometimes on-target critique of kleptocratic public- and private-sector elites.