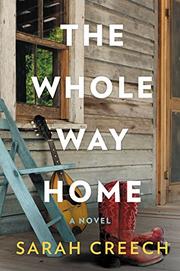 The dreams of up-and-coming country musicians clash with the reality of the industry in the latest novel by Creech (Season of the Dragonflies, 2014).

Jo Lover is poised to become the next big star of country music, with a stage persona and sound in the same vein as Dolly Parton and Loretta Lynn. Having grown up poor in rural Virginia, Jo has built an identity as a strong, independent woman in trademark red boots. But when her independent label signs a Top 40 band fronted by her first boyfriend and former musical partner, J.D. Gunn, she finds her entire world turned upside down—and threatened by a secret she'd managed to keep out of the press until J.D.’s spotlight shone on her as well. On the cusp of the fame she's longed for since she was a little girl, Jo is forced to grapple with her dark past under the close attention of the media. The novel teases out some of the most compelling contradictions in country music, including the role of careful image curation in an industry built on the perception of authenticity and the retrograde place of women in the male-dominated field. The author places the darker, more corporate forces in music today alongside the lives of Nashville hopefuls, making their worlds intersect in interesting (albeit sometimes clichéd) ways. Creech's portrait of Nashville is complex rather than romantic, and she shows that music is as much about business as passion.

Although the rags-to-riches premise feels overdone, the novel’s realism and its portrayal of the conflicts in country music make it engaging from start to finish.