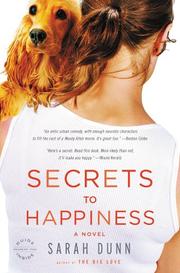 A newly divorced scriptwriter’s search for happiness involves lovers old and new and an adopted dog with a brain tumor.

Sharp-witted Dunn follows her debut (The Big Love, 2004) with a predictably formatted tale simultaneously elevated by its snappy humor and tinged by some reflective shading. Although the story’s principal focus is Holly—35 and only one year out of her marriage to an unfaithful spouse—it also includes the perspectives of several friends and colleagues, each trying to find fulfillment and dodge failure. Best friend Amanda, although seemingly happy in her marriage, has started an affair; Holly’s gay writing partner Leonard is living beyond his means while his career slides into oblivion; Betsy, sister to Holly’s young lover Lucas, is beginning to feel desperate about her stalled job and dismal love life; and promiscuous Spence, one of Holly’s earlier ex-lovers, is starting to find his cheating, one-night stands and dull dates unsatisfactory. Neurotic and New York-y, these characters exchange oddly similar banter while contemplating their individual life paths and beliefs, before embarking on different, possibly more gratifying chapters. Holly’s progress includes nursing the dog with cancer back to health, meeting a possible Mr. Right, losing him again, losing the dog too, but finding new and hopeful next versions of both.

Deft repartee and happy endings all around don’t entirely erase the underlying bleakness in this smart chick-lit tale with dark undertones.