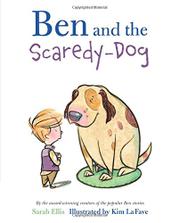 BEN AND THE SCAREDY-DOG

A young boy named Ben makes a new friend and conquers his fear of dogs in this latest offering in a series about learning to deal with new experiences.

In the previous entry in the series, Ben Says Goodbye (2016), the boy had to deal with the loss of his best friend, Peter, when Peter’s family moved away. In this story, Ben watches as a new family moves into the same house, bringing their huge dog with them. Ben and his family are white, and their new neighbors are Asian, with a daughter about Ben’s age named Erv (short for Minerva). When Ben visits Erv at her house, he must face his considerable fear of dogs, including specific worries about canines chasing and biting him “with their strong jaws and big, sharp teeth.” For his part, the friendly dog, Max, is afraid of the slippery, shiny floors in the new house and won’t leave his rug to walk across the floor. Boy and dog conquer their respective fears, with a final, wordless page showing Ben leading Max by his leash as they follow Erv out to play. Ben’s fear of dogs is sensitively portrayed in a text that skillfully interweaves exposition, questions, and dialogue, with Ben’s internal musings set in italics. Amusing illustrations in watercolor and ink make effective use of heavy outlines and copious white space for a clean, contemporary look.

Another successful outing in a winning series, with lots of room for more adventures for Ben and his new friends Erv and Max.