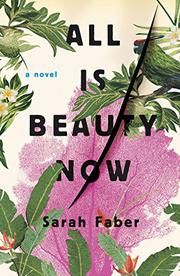 ALL IS BEAUTY NOW

The loss of a beloved daughter, presumed drowned, exposes the secrets and heartache behind the facade of a perfect-seeming family.

It’s 1962 and the Maurer family’s existence in Confederação, a suburb of Rio de Janeiro, is glamorous and privileged. Brilliant, mercurial Hugo, a Canadian employed by BrazCan, feels liberated by “this golden town”; his beautiful wife, Dora, with her wealthy Brazilian roots, is at home here; and their three daughters enjoy the beaches, their own lush garden, and the care of servants. But the Maurers’ life is not quite as flawless as it seems. Charismatic Hugo is subject to extreme mood swings: sometimes he’s overflowing with impulses, ideas, and energy, while at others times he's cowed and despairing. Luiza, his eldest daughter, with whom he has a special bond, finds herself taking on some of the adult role of caring for him, while Dora feels guilty for diminishing her child’s “capacity to live a normal, starry young-girl life.” As Hugo’s illness deepens, the family’s finances oblige them to move back to Canada, but then, just before their departure, Luiza goes missing from the beach. Faber’s pensive, psychologically probing debut is tireless in its mapping of the Maurers’ geometry, tracing each family member’s feelings from a point a year later, after Luiza’s symbolic funeral. The Maurers' plans to leave the country have resumed, but then come rumors that Luiza might not have drowned after all. This slow, late plot thread, though welcome, isn’t quite enough to energize a story so preoccupied with the delicate inner fretwork of psychological perspectives. Notable for its lovely prose and melancholy empathy, the book is slowed by its narrow focus and circularity. There’s a peaceful conclusion waiting, though, for readers happy to stay the course.

At its best, a finely observed consideration of how mental illness impacts an entire family.