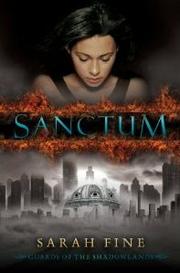 From the Guards of the Shadowlands series, volume 1

A paranormal romance confirms that, indeed, hell is hell.

A convoluted sequence of events finds university-bound foster kid Lela, 17, dead. She wakes up in a paradisaical countryside—which she rejects in order to enter the Suicide Gates to save her best friend, Nadia, who killed herself a week before. Within the gates, hapless embodied souls wander aimlessly in an urban landscape of utter misery, kept in by Guards and threatened by Mazikin, who steal their bodies and condemn their souls to who-knows-where. Lela quickly draws the attention of both Guards and Mazikin, persuading the incredibly hot Malachi, human Captain of the Guard, to help her rescue Nadia. Fine’s gloomy city of suicides and the rules that govern it will draw readers in, though the motives of the thoroughly evil Mazikin are unclear. Her theology is equally fuzzy; readers who want to find the overt Christianity implied by the concept may need to wait for subsequent volumes. Theology be damned, though: Lela and Malachi are both likable protagonists, and readers will be happy (though not surprised) to find them drawn together; the supporting cast among the Guards is also strong. A touch of homoerotic creepiness to hammer home the evil of the Mazikin will distress many readers. This flaw notwithstanding, this trilogy opener has a lot going for it. (Paranormal romance. 14 & up)