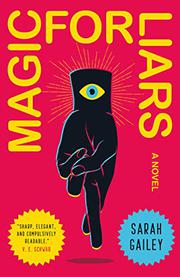 A private investigator is hired to solve a murder at a magical academy where her sister teaches in Gailey's (The Fisher of Bones, 2017, etc.) contemporary fantasy.

Ivy Gamble has worked 14 years as a PI, following around cheating spouses and solving insurance-fraud cases. When she's hired for a genuine murder case, her ambition (and her empty bank account) leads her to accept the job...even if the clients are the last people she wants to be working for: magicians. The dead woman was a teacher at the Osthorne Academy for Young Mages, where Ivy's estranged sister, Tabitha, also teaches. The two have barely spoken for years, ever since Tabitha's burgeoning magical abilities and Ivy's decided lack of them drove a rift between them. But to solve the case, Ivy will have to enter her sister's world, where even freshmen can make pencils fly or glamour away a bad hair day. And there's no shortage of suspects among the student body, from queen bee Alexandria, who seems able to exert unnerving control over everyone else, to her half brother, Dylan, obsessed with his foretold destiny. Or perhaps it's a teacher, such as the charming Rahul, who finds Ivy delightful—as long as she makes him believe she's a magician, too. While the whodunit twists and turns in satisfying fashion, Ivy's real search here is for peace and forgiveness: forgiving her sister, and herself, for their mutual histories. The truth will out, even if it's truths that Ivy and Tabitha have each struggled to forget. The worldbuilding is thin, but the tensions between the characters sweep readers past any questions that might result.

A poignant and bittersweet family tragedy disguised as a mystery but with a magic all its own.