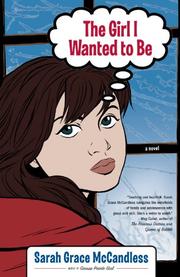 THE GIRL I WANTED TO BE

A family secret forces a gawky teen to grow up quickly, in McCandless’s second stab at fiction.

Fourteen-year-old Presley Moran has always worshiped her reckless Aunt Betsi, who gave her, among other gift she deems priceless, her cool name. It is the summer before Presley is to start high school, and, though nervous, she has two exciting family figures around who promise to help ease the transition: Aunt Betsi, who is recovering at Presley’s family’s cushy suburban house after a stint in rehab, and Barry, her handsome 17-year-old cousin who will be a senior and star football player at the same school. Presley nurses her awkward crushes on both, borrowing Betsi’s clothes and confiding in her about boys, and reveling in Barry’s nonchalant attention at school. But caught up in her own adolescent dramas, she doesn’t realize how much time Barry and Betsi are spending with each other—and how dangerous their relationship will become. When she realizes that these two idealized figures have been lying to her, Presley begins to question whom she can trust. Her parents have their own issues, her younger brother Peter is essentially a well-behaved robot and her school friends bail when her problems extend beyond gym class. In a surprising turn, she finds a confidante in Barry’s best friend, Jack, and realizes that painful discoveries can also bring comforting and happy ones. McCandless (Grosse Point Girl, 2004) does capture some of the nuances of adolescence, but while the story hangs together well, it isn’t deep enough to transcend the alienating tone of youth.

Though marketed to an adult crowd, this story’s focus and the voice are unmistakably YA.