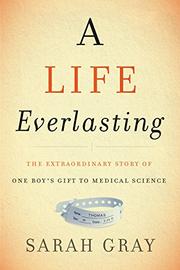 How the author gave meaning to the short life of her son, who was diagnosed with anencephaly, a fatal neural defect.

Gray and her husband were jubilant to learn that they were to be the parents of identical twins, only to have their hopes dashed when a subsequent screening revealed that one of them had anencephaly and would live a few days at most. She writes poignantly of the remaining months of her pregnancy and the need to prepare for one baby joining their home while bracing themselves “for the heartbreak of losing a child at the same time.” Online, she learned about a research program being conducted at Duke University in which researchers were seeking a cause or cure for the defect by analyzing the blood of the parents and the cord blood of both twins. The Grays decided that they would give some meaning to their tragedy by participating in the program and donating the body of their infant after his death, and the author organized the logistics of preserving and transferring his remains. At the time of her pregnancy, Gray worked in marketing for the National Industries for the Severely Handicapped, managing a speaker's bureau that enlists people with disabilities to themselves become advocates. She is currently employed as director of communications for the American Association of Tissue Banks as an advocate for organ, eye, and tissue donations. Inspired by the hope of finding out how her son's brief life took on meaning, she traveled to the various institutions where his tissues have been studied by researchers. She writes movingly not only of her own experience finding out how her dead son “was contributing to the greater good,” but also of the positive emotional impact of her visits on the researchers themselves.

An informative account of the various aspects of organ donation and an inspiring affirmation of the potential value of every life, however brief.