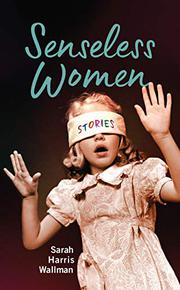 Being a woman is no walk in the park in this debut collection of intricately plotted, sometimes fabulist stories.

Women suffer, Wallman suggests, whether because they're concerned mothers, jealous lovers, or dieting wives. Sometimes men are the source of this pain, but often women are to blame. In "The Dead Girls Show," dead women (like the Hanged Girl and Arabella, the anorexic) put on a ghastly show where men can come and ogle their emaciated bodies and broken necks. But it's the no-nonsense strippers who see the dead girls as a threat and beat them up. Competition among women is also at the heart of "Senseless Women." A nurse named Miriam becomes obsessed with a patient who speaks incessantly even though she has lost her mind. As their histories merge, it becomes clear that Miriam's fallen prey to jealousy and drifted from her family. Plot twists and aha moments drive many of these pieces, sometimes successfully, as in "The Malanesian," which moves between the story of a runaway teenager and that of an affluent couple and their foreign maid until the two narratives come together with a satisfying pop. In "Only Children," however, a plot swerve cheapens an otherwise shrewd exploration of stepparenting. Indeed, when Wallman hews closer to realism, she shows off her considerable talent for expressing things dangerously thorny and fiercely true. In "Junk Food," which is about nothing more and nothing less than a mother spending the night with her ailing newborn, the protagonist reckons, "She did not wish she was in Italy. She did not unwish the baby. She was caught in the suffering of wanting to wish these things, wanting even to remember them clearly, and running up against a blockage of pain knitted from love and hormones."

Imaginative work that shows how much women deserve better plots.