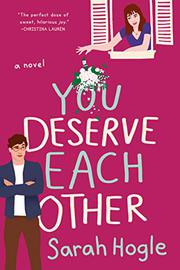 YOU DESERVE EACH OTHER

Naomi Westfield and her perfect fiance, Nicholas Rose, are just a few short months away from walking down the aisle. But there’s one big flaw in their seemingly idyllic relationship: She hates him.

Naomi is an underachiever who works at a local junk store that’s on its last legs. She isn’t close to her family, her only friends are her ragtag bunch of co-workers, and she is so run down by her fiance’s overbearing mother that she has all but checked out of her own life. But when she discovers that Nicholas is just as tired of her as she is of him, Naomi decides to wage a war in the form of petty pranks, mind games, and general sabotage to get Nicholas to call off the wedding. Nicholas, the upstanding dentist who nevertheless cowers in the shadow of his mother’s expectations, responds by buying a house in the woods. He is convinced the move will save their relationship, but Naomi is dubious. At this point it’s clear that the novel would be greatly improved by a dual narrative—Naomi is so utterly convinced of Nicholas’ hatred and lack of interest (despite all evidence to the contrary), and responds so cruelly based on her convictions, that it’s difficult to understand why Nicholas would want to marry her at all. Although self-centered Naomi eventually comes to the realization that she has been ignoring the realities of her relationship, it’s a revelation that arrives far too late—all the romance in this overlong rom-com is relegated to the last few pages. There are glimmers of important discussions about mental illnesses like anxiety and depersonalization, but they never go past surface level, a lost opportunity to elevate the text.

A page-turning premise that gets overshadowed by its unlikable heroine.