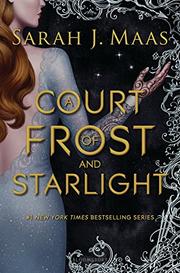 A COURT OF FROST AND STARLIGHT

From the Court of Thorns and Roses series, volume 4

A glimpse of the characters dealing with rebuilding and fallout after A Court of Wings and Ruin (2017).

In a change of pace from the usual epic struggle against powerful forces, this slimmer-than-usual volume follows the cast during the festive Winter Solstice holiday. Nods to trouble on the horizon (dissent in the Illyrian ranks, Fae courts eyeing for expansion, and a politically fraught situation among humans) remain distant, the lack of progress at times resulting in frustrating repetition. Cassian’s and Mor’s backstories are explored, and prickly Amren’s low-key relationship storyline is supplemented by her High Fae adjustments (including bodily humor). While Elain is becoming more comfortable, she still wants nothing to do with Lucien (who feels like an outsider nearly everywhere and has his hands full with a self-destructive Tamlin). Severely struggling Nesta self-medicates through alcohol, meaningless sex, pushing everyone away, and finding every last seedy corner of the otherwise utopian Velaris. While Rhys handles politics, Feyre’s storyline revolves around Solstice shopping and art’s potential for healing trauma—when the lovers aren’t telepathically sexting or craving each other. Aside from occasional minor characters, most of the inhuman cast seem white. Several plotlines are predictably resolved.

With introspection replacing battles, this extended epilogue gives breathing room between dramatic arcs but is best for readers who’d prefer downtime with the characters over high stakes.