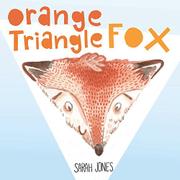 An exploration of colors, shapes and animals.

On the left-hand side of the page, against a solid background of the shade in question, a white shape with three words in its interior names the attributes being described: “purple heart bug” or “red square owl.” On the facing pages are Jones’ winsome animal drawings in what looks to be a watercolor wash in a pale shade of the featured hue. Each animal forms the shape that has been named—some more successfully than others. The hedgehog “circle” is actually an oval, and the blue jay’s rectangular form is more than a little forced, but the frog cleverly conforms to the star’s shape, and the turtle makes a convincing semicircle. The companion title, Bunnies Near and Far, also focuses on multiple concepts at once; a warren of rabbits demonstrates opposites and counting up to 10. The bunnies are quite adorably fluffy as they go for a ride in a carrot-shaped car or attempt to play guitar collectively. While the opposites are clearly presented (near/far and up/down), the critters are shown as big, white heaps of fur, thus making them difficult to count. A faint, extra bunny appears on the last spread, bringing the number of rabbits up to 11, even though the rhyming verse instructs readers to count up to 10.

What this and its companion lack in clarity of concepts, they make up for in character.