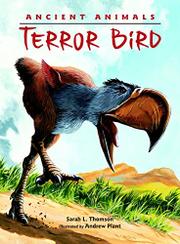 Potentially high-interest nonfiction content is obscured by missed opportunities for collaboration between art and text in this early reader.

Although the text immediately establishes the temporal and physical setting (“This is South American fifteen million years ago”), ensuing pages fail to clarify the introduction of the book’s subject, a now-extinct predatory bird. A frontmatter note indicates “The terror bird featured in this book is Kelenken guillermoi, a seven-foot-tall predator that lived about fifteen million years ago,” but if readers miss this key notation, they may flounder as they read about the eponymous terror bird’s predatory ways. The text intersperses facts within imagined hunting scenes, but the art fails to make the most of the descriptions. For example, the fourth page of text tells readers that “There were many kinds of terror birds. The smallest was the size of an eagle. A large one could be the size of a basketball hoop.” The accompanying picture shows two prehistoric birds labeled Brontornis and Psilopterus, and although they contrast greatly in size, they are set against an entirely white page, so there is no indication of scale to match the text. A more successful spread compares the role of these top predators with those that exist today, such as sharks, wolves and tigers.

An uneven, though potentially engaging, offering.