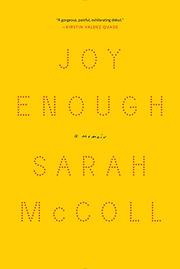 A debut memoir focused on divorce and death.

Beginning with her own youth, essayist McColl, the founding editor-in-chief of Yahoo Food, notes that her mother was her “spiritual home,” and she venerates her mother on almost every page of the book. Looking back, the author recalls her mother as a colorful mixture of wisdom and sensuality whose role as a mother was perhaps the ultimate aspect of her personality. Her parents’ divorce shattered McColl’s world for a time, leaving her even more invested in her mother as her basis for stability. The author eventually married, beginning a long road to divorce. McColl’s descriptions of her ex-husband do not immediately elicit sympathy; the couple simply drifted apart, the husband toward his career, the wife toward her dying mother. “I loved my husband,” she writes, “and then I didn’t. Is that a story?” Throughout the book, the author sets her narration against the backdrop of her mother’s illness, an era that clearly affected nearly everything else in her life. Her mother’s eventual death left McColl with “a roiling grief” so great and traumatic that she even decided against her therapist’s suggestion of a grief counseling group: “Someone else might know loss, but no one could understand mine.” Though poignant in spots, the book is nearly devoid of hope or significant life lessons; it is ultimately a study in sadness and seemingly relentless unhappiness brought on by chronic grief and relational ennui. As a writer, McColl is introspective and attempts to be inventive, but much of the prose demonstrates an author trying too hard: “The sound of fireworks in the distance. Here, fireflies. I wanted to tie myself up in his arms and he wanted to be the rope.”

A depressing and often cloying memoir that may hold some appeal for readers in similar circumstances with a penchant for dwelling on heartache.