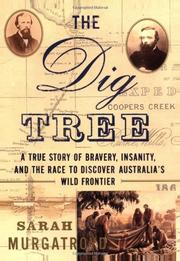 A True Story of Bravery, Insanity, and the Race to Discover Australia’s Wild Frontier

A shimmering reconstruction of the 1860 Victorian Exploring Expedition, which sought to traverse Australia south to north and needed no clairvoyance to predict its end in disaster.

The age of exploration was ending, but there remained great swaths of land outside the ken of Europeans, and one of these was interior Australia. The Royal Society deemed it time to finance an expedition through the uncharted landscape. Journalist Murgatroyd, however, notes that the expedition, while allowing for feints toward the heroism of exploration and the desire for scientific knowledge, may have been motivated primarily by economic considerations: control of the future telegraph cable and the possibility of overland trade with Southeast Asia. The leader of the expedition, Robert Burke, was a bit of a loose cannon with a reputation for spending “hours lying in his outdoor bathtub, wearing nothing but his police helmet, reading a book, and cursing the mosquitoes.” Without any background in exploration, little regard for the scientists among his company, less for the aborigines he met en route (“he had come to conquer, not to learn”), and an overburden of fruitless supplies—he had packed a goodly supply of dandruff brushes—Burke made numerous logistical blunders in his drive to secure his patron’s wishes, ultimately finding himself with three men pushing his way to the north coast, amid “a continuous mass of mangroves, mosquitoes, mud, and mosquitoes.” He made it, but he wouldn’t make it back, nor would many of his men. Little of practical nature was made of his discoveries, yet he is remembered in Australia as a hero. By Murgatroyd’s lights, he was lucky to make it as far as he did before, inevitably, his luck wore out.

A sorry, if Herculean, chapter in Australian history, albeit venal and murderously inept, told by Murgatroyd with verve and a gathering sense of doom. (Photographs and maps)