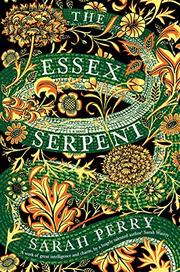 The unlikely friendship between a canny widow and a scholarly vicar sets the stage for this sweeping 19th-century saga of competing belief systems.

Widow Cora Seaborne knows she should mourn the death of her husband; instead, she finally feels free. Eschewing the advice of her friends, Cora retreats from London with her lady’s maid, Martha, and strange, prescient son, Francis. The curious party decamps to muddy Essex, where Cora dons an ugly men’s coat and goes tramping in the mud, looking for fossils. Soon she becomes captivated by the local rumor of a menacing presence that haunts the Blackwater estuary, a threat that locks children in their houses after dark and puts farmers on watch as the tide creeps in. Cora’s fascination with the fabled Essex Serpent leads her to the Rev. William Ransome, desperate to keep his flock from descending into outright hysteria. An unlikely pair, the two develop a fast intellectual friendship, curious to many but accepted by all, including Ransome’s ailing wife, Stella. Perry (After Me Comes the Flood, 2015) pulls out all the stops in her richly detailed Victorian yarn, weaving myth and local flavor with 19th-century debates about theology and evolution, medical science and social justice for the poor. Each of Perry’s characters receives his or her due, from the smallest Essex urchin to the devastating Stella, who suffers from tuberculosis and obsesses over the color blue throughout her decline. There are Katherine and Charles Ambrose, a good-natured but shallow society couple; the ambitious and radical Dr. Luke Garrett and his wealthier but less-talented friend George Spencer, who longs for Martha; Martha herself, who rattles off Marx with the best of them and longs to win Cora’s affection; not to mention a host of sailors, superstitious tenant farmers, and bewitched schoolgirls. The sumptuous twists and turns of Perry’s prose invite close reading, as deep and strange and full of narrative magic as the Blackwater itself. Fans of Sarah Waters, A.S. Byatt, and Elizabeth Gilbert’s The Signature of All Things should prepare to fall under Perry’s spell and into her very capable hands.

Stuffed with smarts and storytelling sorcery, this is a work of astonishing breadth and brilliance.