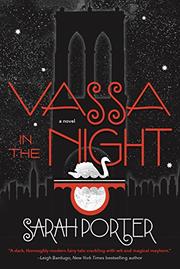 VASSA IN THE NIGHT

Brooklyn is an enchanted kingdom where most aspire to arrive—most of it, that is, the exception being Vassa’s working-class neighborhood, where the white teen lives with her stepmother and stepsisters, struggling with the feeling that she does not belong.

In Vassa’s neighborhood, magic is to be avoided, and the nights have mysteriously started lengthening. Baba Yaga owns a local convenience store known for its practice of beheading shoplifting customers, but it seems that even the innocent are susceptible to this fate. One night, after an argument with a stepsister, Vassa goes out on an errand to Baba Yaga’s store—one she knows may be her last. With her magic wooden doll, Erg, a gift from her dead mother, Vassa is equipped with some luck that she will very much need. Erg is clever and brazen, possessing both an insatiable appetite and a proclivity to swipe the property of others. But will Erg’s magic be enough to help free Vassa from Baba Yaga’s clutches and possibly her entire Brooklyn neighborhood from the ever increasing darkness? Vassa’s narration is smart and sassy but capable of wonder, however familiar she’s become with Brooklyn’s magic. In this urban-fantasy take on the Russian folk tale “Vassilissa the Beautiful,” Porter weaves folk motifs into a beautiful and gripping narrative filled with magic, hope, loss, and triumph.

An enthralling, magic-tinged read about home, family, love, and belonging.