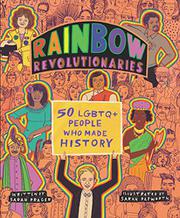 Fifty LGBTQ+ People Who Made History

This colorful compendium covers 50 boundary-breaking LGBTQ+ figures from across history and around the globe.

Starting at A with Adam Rippon, each hero receives a straightforward one-page biography that includes an account of how they changed the world, broke a barrier, or fought for LGBTQ+ rights and is accompanied by vivid, blocky illustrations. This list of potential role models includes big names like Harvey Milk as well as some that may be unfamiliar to many Americans, like Simon Nkoli. The selection showcases a diversity of races, ethnicities, genders, and sexualities, with some gaps; for example, the glossary explicitly includes intersex people, yet none are identified as such within the text of their biography, and the only East Asian included is from the second century B.C.E. Stylistically, many of the sentences are wordy and sometimes awkward, including unclear or unusual constructions and tone shifts. Add a handful of cringeworthy word choices, such as “between her legs” and an instance of “female” used as a noun, and readers may find themselves shaking their heads. Nevertheless, this does not diminish the book’s fundamental value as a resource for young people. Prager presents each figure with enthusiasm and provides lots of interesting details that allow readers a glimpse into that person’s world, be it 1970s San Francisco or 1600s Mexico.

An exciting if uneven volume that offers much to inquisitive kids seeking LGBTQ+ information.