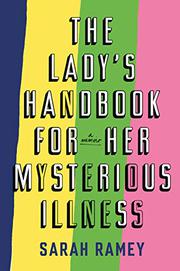 THE LADY'S HANDBOOK FOR HER MYSTERIOUS ILLNESS

A memoir that explores the idea that women with chronic illnesses need to rally for appropriate medical care.

Making her book debut, Ramey, a writer and musician (known as Wolf Larsen), recounts, with captivating zest, a sorry tale of suffering from a cluster of symptoms that defied diagnosis. “I thought I was the strangest medical case on the East Coast,” she writes, only to discover many others like herself. She was “a woman with a mysterious illness,” a WOMI, chronically exhausted, aching, “likely in possession of at least one autoimmune disease,” and likely to go from physician to physician in search of understanding. The daughter of physicians, Ramey began her quest for help believing unquestioningly in “Magical Pillthink,” the notion “that if something is wrong, there is always a quick fix.” She visited countless specialists and was treated with a host of medications that sometimes temporarily relieved symptoms, but more often not. She experienced “extremely bad—and often explicitly abusive—medical care,” including botched surgeries. The author began to research her condition on her own, making some startling discoveries: the rise of autoimmune diseases in the last 30 years; the significance of the intestinal microbiome to digestive health and fatigue, aching, and “brain fog”; the role of antigens in producing an overactive immune response; physical and emotional traumas that can trigger WOMI symptoms; and microglia, tiny immune cells that protect the brain and nervous system that can become inflamed in response to a variety of stressors. Repeatedly prescribed antidepressants from frustrated doctors, Ramey indicts the medical establishment for its “contempt for women, and for the feminine,” and recommends the new approach of functional medicine, which holds that “diet, lifestyle, and attitude are the cornerstones of health” and incorporates “testing, treating, and stabilizing” the four systems involved in “modern chronic illnesses:” the gut, liver, immune system, and endocrine system. Finally, her condition improved through common-sense changes: “Sleep, movement, a nontoxic environment, and a well-nourished psyche,” Ramey concludes, are the basic needs for recovery.

Impassioned testimony of a fight for health.