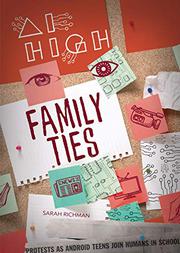 From the AI High series

Julie balks at working with android Leila as part of her high school’s integration program.

When interacting with Leila reveals that androids might not be as bad as Julie’s parents preached, Julie learns to use her human privilege to stand up for android rights. All books in the AI High series take place at Julie and Leila’s high school, where tensions between humans and androids run high. In Team Player by Jeffrey Pratt (The Prank, 2019), the star quarterback finds himself replaced by the first android addition to the team. Star-Crossed, by Loren Bailey (Becoming Prince Charming, 2018, etc.), is a Romeo and Juliet story about human Alyssa and android Reid. Claire Ainslie’s (The One, 2019) Detained profiles an android who vandalizes the school in retaliation for bullying from human peers. While the latter three titles balance storytelling with pointed lessons about prejudice, Family Ties reads like an oversimplified introduction to racial injustice. Humans represent a white community while negative stereotypes about androids echo real-world racial hostility. Though a couple of the other books feature ethnic diversity among humans and androids, in Family Ties, only android surnames indicate diverse backgrounds (Farid, Goldman, Kim). When Julie intervenes in an anti-android protest, victory is easily won. Ultimately, the topics of prejudice and bigotry deserve to be addressed with more nuance and less attempt at veiling the subject matter.