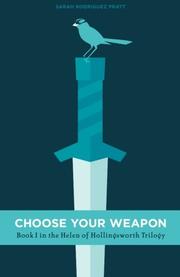 Book 1 in the Helen of Hollingsworth Trilogy

Smart, sensitive, socially awkward and trapped in the suburbs, Helen Connor finds purpose and excitement by fighting dragons in a mythical land.

Rodriguez Pratt’s debut novel, the first in an anticipated trilogy, tells how Helen’s love for the Glorious Dragonfighter book series leads to her entry into the warrior training program in Erwingdon, an apparently not-so-fictional land where devious, malevolent dragons are attempting to take over and rule. Helen’s advancement through her training is well-paced and entertaining. The primary strength of the book, however, lies in the intersections between Erwingdon and Helen’s “real world” home of Hollingsworth, Texas, a typical American town struggling with the loss of industry, encroachment of sprawl and sharp divisions of wealth. Like Helen, several of her schoolmates also have parallel lives in Erwingdon, a plot device that initially seems like an eye-rolling coincidence. This conceit, however, allows the author to examine the teens’ more familiar concerns—navigating the social atmosphere of high school, grappling with authority, dealing with parental expectations, worrying about the future—through the lens of life, death and saving the world. The novel divides its time evenly between Hollingsworth and Erwingdon, and in both places, the teenagers seem real and three-dimensional. While there’s no drug use or sex, there’s plenty of swearing and fighting and some alcohol, although Helen herself abstains. Rodriguez Pratt’s skilled writing ranges from snappy, believable dialogue to evocative descriptions of an abandoned oil refinery and a terrifying dragon cave. Several plot arcs end satisfyingly in this first book of the trilogy—Helen finishes her training and wins some battles in both worlds—but a few loose ends remain. What will become of the new sorcerer’s apprentice? How will Helen’s love interests resolve, both in Erwingdon and Hollingsworth? Who is behind the dragons’ evil plot? After getting to know Helen, her friends and her worlds, readers will want to find out.

A well-written, intelligent, exciting choice for readers looking to get hooked on a new fantasy series.