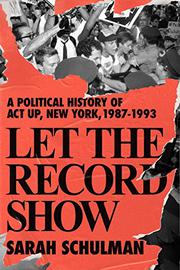 The veteran author, screenwriter, and activist delivers a significant boots-on-the-ground account of the New York City chapter of the AIDS Coalition to Unleash Power.

Though divisive, ACT UP’s in-your-face activism unquestionably improved life for subsequent generations of people with AIDS. Many of the volunteers saw themselves as warriors, some fighting for their lives by forcing governmental health institutes to care about them and stop delaying treatments. Founded in 1987 by novelist and playwright Larry Kramer, the New York chapter served as the “mothership” of what eventually became 148 chapters worldwide. The organization’s strategy of confrontation was inspired by Kramer’s insistence on political agitation born of necessity. Days before ACT UP was formed he notoriously told a crowd, “In five years, half of you will be dead!” ACT UP’s “boldest act of broad leadership” was the Stop the Church campaign, waged on Dec. 10, 1989, with WHAM! (Women’s Health Action and Mobilization). In a “raw display of power,” activists interrupted a Catholic service at St. Patrick’s Cathedral, garnering heaps of both positive and negative media coverage. “Nothing could have been more counter to assimilationist or respectability politics than Stop the Church,” writes Schulman, who was a rank-and-file ACT UP volunteer. A longtime historian of LGBTQ+ activism, the author takes to task other histories of AIDS, including David France’s documentary film How To Survive a Plague (2012), which focuses on the “heroic white male.” Schulman clearly demonstrates that ACT UP was founded in part to engender a relentlessly democratic and inclusive force of activism. That ideology explains the heft of this book, which isn’t written as traditional history but as a mashup of events witnessed by Schulman and oral history that’s truly all-encompassing. Readers are right there with activists, hearing their stories from them but also others who knew them. “Drive and commitment, invention and felicity, a focus on campaigns, and being effective are the components of movements that change the world,” writes Schulman, an assertion born out in the stories told here.