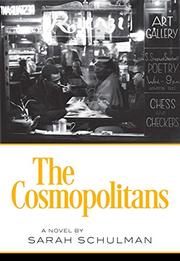 Style and setting allow some beauty to intrude on this story of love, loss, and how low one might stoop to right a wrong.

Bette lives alone in Greenwich Village, stewing over her family's rejection and denial of a grave betrayal. Across the hall, Earl struggles to find work as an actor; in 1958, being black restricts his choices, and being gay means hiding even more of his desires. These two form a family of sorts as later middle age approaches, but when Bette's cousin Hortense enters their lives, the initial novelty festers into something grim. Schulman (The Mere Future, 2009, etc.) takes chances with style and structure. The word jazz that pops and crackles in occasional street scenes is overlaid with what she describes in an afterword as the stilted British voice that marks many works in translation. She also writes herself into the story as the squalling newborn down the hall; her crying precipitates a vital scene. Bette's integrity quickly comes undone when she feels she's been wronged (by Earl and Hortense but also by her family back home), and her work in the evolving field of television advertising offers her a thoroughly modern set of tools with which to wreak destruction. There are times when her manipulations are hard to watch yet impossible to turn away from; her victories, though hard-won, are full of contradictions, and Earl’s actions are no less complicated. Yet all this drama is grown from shared cups of tea, poetry, and late-night conversations, commiserations about jobs and romance, the long roots of an established friendship. It testifies to the elegant construction of the novel that it can balance the hopes of an entire era on the backs of a fragile relationship and leave no doubt as to its resilience.

Jarring and beautiful, this is a modern classic.