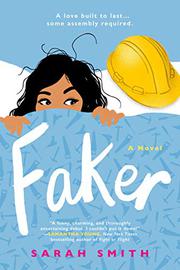 An enemies-to-lovers office romance between two introverts who misjudge each other, and themselves.

Emmie Echavarre is always in “boss-bitch mode” at Nuts & Bolts, the male-dominated power tool company where she works as a copywriter. One of the few women or people of color at the company, Emmie is confident and assertive because she has to be. Growing up being bullied for her Filipina ethnicity, she can handle the mansplaining from managers and innuendos from workers on the factory floor, but what she cannot handle is the hostility directed her way every day by co-worker Tate Rasmussen, the social media manager in the office across the hall. From day one, Tate, a blond Chris Hemsworth look-alike with the biceps to match, has disliked Emmie. But when they are forced to work together on a long-term project, they begin to get to know one another, and an unexpected romance begins. Smith, a debut author, writes only from Emmie’s first-person point of view and has some trouble nailing Tate’s character. His initial attitude toward Emmie is described as “rude, dismissive,” “cold, calculating, and hostile,” and “passive aggressive,” more hate-hate than love-hate. The explanation eventually offered is unconvincing. Tate is an extreme introvert, a loner who is often anxious and awkward in social situations, and he can be rigid and controlling. But Emmie is fascinated by him, as his caring and funny sides are revealed through quiet moments of conversation and kissing, and readers may become so as well. Readers who enjoyed Sally Thorne’s The Hating Game will enjoy this one as well.

A sweet, slow-burn romance between rival co-workers at a power tool company makes for a promising debut.