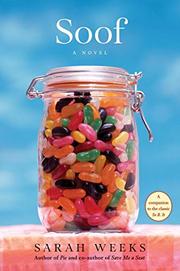 Fans of Weeks’ So B. It (2004) will recognize this companion book’s title as Heidi It’s intellectually disabled mother’s word for love.

Twelve-year-old narrator-protagonist Aurora Franklin, the biological daughter of the couple who fostered Heidi before Aurora was born, has grown up hearing about Heidi and her good luck. Her parents—Mom especially—credit this good luck with giving them Aurora. Sadly, Mom’s love for Heidi has instilled feelings of inadequacy in Aurora, who believes her mother wishes she were more like Heidi. Aurora has always been different. She speaks a made-up language called Beepish, prefers the company of adults to that of children, and wears her T-shirts inside out because of the bothersome tags. Mom was 48 when Aurora was born, resulting in anxiety for her daughter’s well-being. She sought desperately for a diagnosis, but doctors ruled out autism spectrum disorder, concluding that “quirky” Aurora simply marches to her own beat. A now-grown and pregnant Heidi’s impending visit triggers tension between Aurora and her mother, and Aurora is determined not to be nice to Heidi. Will she learn there’s “soof” enough for them both? Aurora is complex, simultaneously eliciting sympathy and exasperation. She’s blunt, bordering on rude, but her heartache at losing her dog, her only friend, is palpable. Knowledge of the previous book isn’t a prerequisite. The book adheres to the white default.

A sweet story that shows all you need is soof.