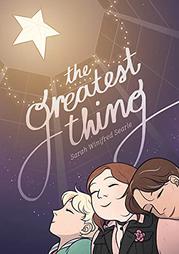 A young woman is apprehensive about starting the school year after her two closest friends move to a different school.

Introverted, talented, and filled with self-doubt, Winifred is the focus of this simply drawn story; uncluttered panels and an appealing, muted color scheme let her introspective narration take center stage. She loves drawing and photography, gets middling grades in some of her classes, and is self-conscious about her weight—to the point that she has begun to eat foods she knows make her sick (she is lactose intolerant) as a sort of self-punishment. Set in the Portland, Maine, area in the early 2000s, the storyline follows Winifred as she makes new friends: She becomes especially close to April, who also has an eating disorder and whose wealthy parents are emotionally absent, and Oscar, who struggles with depression. Winifred and Oscar work together on a zine that is featured in its entirety in four parts. Initially, Winifred thinks she may be interested in Oscar, but she later realizes she is really attracted to a girl named Tilly. Set in an era when landline phones were still in use, the story explores sexuality, mental health, and the messiness that goes with understanding of self in ways that will resonate with contemporary readers. Varied visual perspectives, clean linework, and easy-to-read speech bubbles contribute to the pleasurable reading experience. Winifred and April read as White; Oscar and Tilly have brown skin.