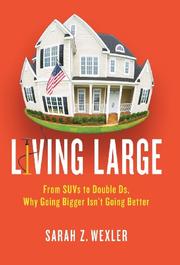 A sociological exploration of America’s obsession with the supersized lifestyle.

“There’s nothing wrong with our living large, nor anything particularly new about it,” writes journalist and debut author Wexler, citing Manifest Destiny as historical proof of America’s longtime tradition of consumption. Yet being the biggest comes with a price: “We have the largest gross domestic product and the largest gold reserves, but also the largest national debt,” With size comes responsibility, and as the author recounts throughout her examination of the “largeness” of America, that responsibility is often lacking. Americans live in McMansions, attend mega-churches and demand the most plastic surgery and the largest engagement rings, all while openly celebrating their gluttony. The juxtaposition of the McMansion phenomenon alongside mega-churches offers a unique perspective on America’s psyche. While McMansions are “a tangible way to show yourself and everyone else…that you’re movin' on up,” the appeal of mega-churches is the safety of anonymity. Wexler argues that the average American desires to stand out while simultaneously remaining unnoticed, a fascinating and unexplainable contradiction. Why do Americans prefer the anonymity of a mega-church while demanding the flashiest engagement rings? Attention is “part of why we consume big,” writes the author. “A Hummer will draw more attention than a common Corolla, a McMansion more than a town house. Extra-large breast implants are a way to wordlessly, constantly shout, ‘Look at me!’ It’s like peacocks unfurling their flashy tails.” But bigger isn’t necessarily better. Wexler reminds us that Americans have completely lost perspective, both literally and figuratively. Throughout the book, the author’s message remains clear: In the 21st century, standing out is just another way of fitting in.