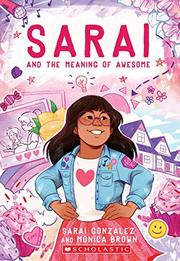 SARAI AND THE MEANING OF AWESOME

From the Sarai series, volume 1

Young debut author Gonzalez joins veteran co-author Brown (Lola Levine and the Halloween Scream, 2017) to kick off a semiautobiographical chapter-book series based on her life growing up with a large and loving immigrant family in New Jersey.

Fourth-grader Sarai is the oldest of three girls in a tightknit Latinx family (her mom was born in Peru, and her dad was born in Costa Rica). She is the epitome of positive thinking, with ambition to spare. When her beloved grandfather learns that the owner of the house he has been renting, and which he shares with his extended family, has decided to sell, Sarai is immediately concerned. Where will her abuelos, tíos, and primos live? What if they are no longer close by? Sarai’s optimism does not let her stay down for long, and she immediately hatches a plan to use her fledgling cupcake business to raise the money needed to buy the house. Little sisters making a mess of the kitchen cause some trouble, but basic economics presents insurmountable odds—still, the ending is undoubtedly happy all the same. Sarai’s neighborliness and strong family values may be aspirational for many in our contemporary society, but her contagious joy might just set readers on the road to remedy that. Though none of her plans ultimately succeed, she remains irrepressibly hopeful throughout; it’s an admirable hope that fuels hard work and ingenuity. Almeda’s illustrations depict Sarai and her family with brown skin and black hair.

A Pollyanna for the 21st century