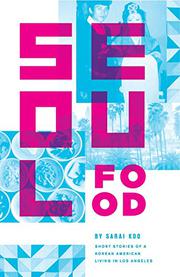 Short Stories of a Korean American Living in Los Angeles

A writer shares anecdotes from her youth in Los Angeles County’s Korean American community in this debut memoir.

The child of South Korean immigrants, Koo, along with her siblings, was forced to abide by certain traditional customs when she was growing up. This included respecting elders, like her grandmother, even when their behavior was somewhat bizarre: “Without our permission, my dad’s mom rampaged through our house with a pair of silver shears, grabbing and cutting pieces of our clothing, big blankets, and any available patches of fabric….She took those pieces of old and new fabric to make oddly-patched small pillow covers.” Sometimes this traditional Korean worldview was shocked by the reality of the family’s American surroundings: Koo’s father’s first gas station was on Crenshaw Boulevard in South Central LA, and a few months after he sold it, the building was set on fire during the city’s riots in 1992. But there was no shortage of other Koreans in LA County, and Koo’s childhood was an often hilarious clash between her American-born peers and her parents’ immigrant generation. At the center of it all, there was always a table laden with traditional food: jeon, bibimbap, banchan, bulgogi, and even the Korean adaptation of the American hamburger (or hambegeo, as the author’s mother called it). Koo’s prose is conversational and amusing, managing to make both Korean and American cultures appear simultaneously alien and familiar: “Ken had long bangs that dangled to the sides of his chin. He was a young eleventh grade ‘wangsta,’ a wannabe gangsta, who wore baggy clothes….He often went to noraebangs to drink, smoke, and sing the latest Korean songs with his fellow wangsta friends, and sometimes he got into trouble.” The book is a thoroughly enjoyable coming-of-age tale of a somewhat precocious girl finding her way in a particularly loud and chaotic environment where the old and the new rested side by side and not always comfortably. Additionally, the work captures a specific time and place in the history of LA and the so-called “Third Wave” of immigration to the United States.

A compelling and often funny account of growing up in one of America’s Korean enclaves.