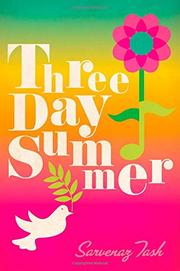 Michael, 18, knows what he doesn’t want—to go to college or be drafted to fight in Vietnam—it’s what he wants that confuses him, and would-be doctor Cora, 17, ponders transgressing cultural expectations for girls. Overcoming their inauspicious meeting in the medical tent, the two are drawn together—along with plenty of baggage. Michael drags his feet on breaking up with his hypercritical girlfriend. Cora longs to get over paternalistic Ned, who’s broken up with her. Michael’s passionate about music but feels like a slacker. Country girl Cora, unlike her brothers, has a nightly curfew and feels torn between her conservative father—proud veteran of two wars—and her anti-war siblings, one fighting in Vietnam. Not all that goes down is benign, but this is no cautionary fable. Sex, drugs, and rock ’n’ roll unapologetically prevail amid the muddy chaos, where strangers feed one another, concertgoers stand in line for hours to use the payphone, and iconic musicians play generational anthems. Against a turbulent backdrop of war, divisive social change, and awful weather, half a million people celebrated peace, love, and music together. Woodstock remains a resonant cultural marker, documenting the brief triumph of hope over experience, and Tash takes ample advantage of the moment.

A positive portrait of a much-maligned era, this optimistic, exuberant tale is recommended for readers who’ve wondered why the ’60s were so great.