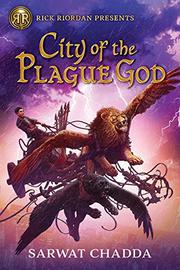 CITY OF THE PLAGUE GOD

After the death of his older brother, Mo, who died during a trip to Iraq, Sik has been working in his refugee parents’ New York deli nonstop, trying to stymie his grief. But when Nergal and his minions trash the deli while seeking a stolen treasure, they start a plague that infects Sik’s parents and threatens all of New York. Teaming up with the goddess Ishtar; her sword-wielding adoptive daughter, Belet; and Mo’s frequently typecast aspiring actor best friend, Daoud, they must find a way to stop Nergal and cure New York’s residents in an epic adventure worthy of Gilgamesh. Chadda brings attention to the less well-recognized mythology of ancient Mesopotamia with engaging humor and wit. Dialogue between characters, most of whom are Iraqi and Iraqi American, allows exploration of heavier topics of Islamophobia, anti-Arabism, and terrorist and Orientalist tropes to be inserted with ease. The Aziz family and Daoud are Muslims; Chadda navigates the difficult line of reconciling the depiction of characters interacting with multiple gods with the fundamental Muslim belief in one God both in the text and the backmatter. Daoud and Mo are alluded to being gay and having been in love.