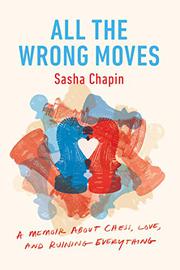 ALL THE WRONG MOVES

A Memoir About Chess, Love, and Ruining Everything

Journalist Chapin makes his book debut with a spirited memoir about his obsession with chess, a game that occupied him for two peripatetic years.

The author first played in high school, when he joined the Pawnishers, “an after-school pack of sweaty teenage boys,” motivated less by a desire to play chess than to “belong to some kind of cadre. Having a ready-made, highly ostentatious identity was socially useful.” Soon, however, he was seduced by the challenge of the game, honing his strategy from Wikipedia and through online matches. He exulted in beating his brilliant older brother, a triumph that proved short-lived when his brother sharpened his own skills. Defeated, Chapin gave up the game until, years later, he sat down at a chess board in the streets of Kathmandu. Quickly, “that old chess feeling was returning—the dizzy pleasure of the potential maneuvers” inviting him “into a tumultuous arena of mental conflict.” That encounter set him off on a quest to become a chess master, with the goal of competing successfully in the Los Angeles Open, an achievement “that would represent a violent assault against the limits of my truly meagre talent.” At the time he reconnected with chess, Chapin was experiencing a vocational crisis, “not entirely convinced by the validity” of being a writer, feeling like “a parasite on my own life. Any compelling character I meet,” he confesses, “excites me not only because they’re exciting but also because I might describe them profitably.” Chess proved to be a great distraction and, soon, an addiction. He joined a chess club and entered competitions in his native Toronto, studied with a “charismatic, frank, and viciously funny” grandmaster in St. Louis, and flew to India, “where chess was born,” to enter a tournament. The author infuses the narrative with exuberant, often funny, anecdotes; glimpses of strategy; and lyrical reflections on why “chess is about the most human thing you can do.”

An entertaining portrayal of the esoteric world of chess.