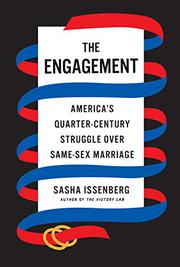 A journalist and political science professor chronicles the fight for same-sex marriage from its beginnings through the presidential candidacy of Pete Buttigieg.

In 1990, three same-sex couples applied “on a lark” for Hawaii marriage licenses. The inevitable rejection set in motion a cascade of legal and political challenges that culminated in the landmark Obergefell v. Hodges decision, which legalized same-sex marriage throughout the U.S. In this exceptionally comprehensive but overlong and inefficiently organized account, Issenberg, Washington correspondent for the Monocle, shows how the movement lurched forward through triumphs in states like Vermont and Massachusetts and seemingly fatal setbacks such as Bill Clinton’s signing of the Defense of Marriage Act in 1996. Advocates of marriage equality had to overcome not just political and religious foes—among them, Catholic bishops, Protestant evangelicals, and the Church of Jesus Christ of Latter-day Saints—but conflicts in their own ranks between incrementalists willing to settle for civil unions and those who saw anything less than marriage as second-class status for same-sex couples. The movement prevailed with the help of courageous opponents such as Dan Foley, a Buddhist attorney who took on the Hawaii marriage-license applicants as clients after chanting about it; and Mary Bonauto, a lawyer for Gay & Lesbian Advocates & Defenders, whom former congressman Barney Frank called “our Thurgood Marshall.” Issenberg’s encyclopedic narrative, though written well on the sentence level, has an inelegant structure that reveals an author unable or unwilling to necessarily condense the narrative (at least 200 pages could have been cut). He also includes too many unedifying details, including an attempt to put Barack Obama’s support for gay rights in context in part by stating, “Both Obama’s high-school drug dealer and favorite college professor were gay men.” Future journalists or historians will likely offer more efficient histories, but Issenberg’s research makes the book a vital source for bookstores, libraries, and LGBTQ studies completists.

An important story of a great civil rights battle told in exhaustive detail.