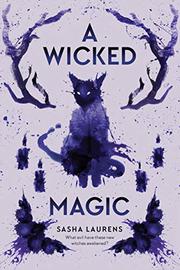 California teens get caught up in a witchy misadventure.

Though Daniela and Liss, who live in a small coastal town in Northern California, share a close friendship, each wrestles with private demons. Dark-haired Dan copes with depression through self-harm, feeling each time she cuts herself that it might bring her some peace. And blonde-haired Liss struggles with poor self-esteem thanks, in part, to an abusive, overdemanding mother with a drinking problem. Together the best friends hope their discovery of the mysterious Black Book in the giveaway box outside a grocery store will fill their inner voids, offering them an irresistible spell for becoming witches and other magical charms, each promising to be one that will change their lives for the better. Unfortunately for these would-be witches, the spell that really changes things results in the abduction of Liss’ boyfriend by an evil spirit and a terrible breach in the girls’ friendship. It is only when the two begin to open up to each other and trust mutual friend Alexa, who has hidden magical powers, that they summon the moxie to try to undo the damage they wrought. In her debut, Laurens weaves an intricate, suspense-filled tale mingling everyday teen angst with otherworldly sorcery. Alternating among the perspectives of the three lead characters, the shifting narrative tantalizes teen readers with the possibility of magic. Dan is Mexican American; Liss and Alexa are cued as white.