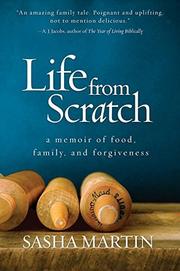 A Memoir of Food, Family, and Forgiveness

An award-winning blogger and MFK Fisher scholar's account of how food not only came to define a difficult childhood, but also became the way she was able to heal her past.

Martin spent her early years living in poverty with her brother, Michael, and a mother who could transform browning bananas, Jell-O and even moldy bread into pure magic. But her mother’s unconventional ways—which included keeping Martin and Michael out of kindergarten—brought her to the attention of the Massachusetts Department of Social Services. Soon, Martin and her brother found themselves shunted between foster homes. Their mother fought for their return; but eventually, she sent her children to live with two friends, Patricia and Pierre, who could give them the opportunities she could not. Pierre kept the family living comfortably though peripatetically, while Patricia never let Martin cook because the kitchen "was no place for a child.” Generosity, however, was not enough. Michael committed suicide just before the family moved to Paris, while the author sought solace in alcohol and edgy friends. At the same time, she also began to develop a passion for the one thing that had connected her to her mother: food. That love eventually inspired her to attend cooking school and follow a path that led her away from the chaos of the East Coast to the “honest, sunburned land” of Oklahoma. There, she found unexpected happiness as a stay-at-home wife and mother and began a blog in which she recorded her experiences “eat[ing] around the world.” Dealing with food inevitably led her to recall the past, and she was forced to confront the pain of old relationships with her mother, her brother and half siblings, and the father she never knew. In the end, Martin learned that her journey had been about getting her fill, “[n]ot just of food but of the intangible things we all need: acceptance, love and understanding.”