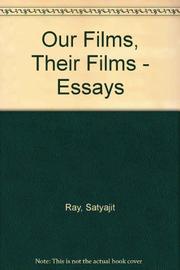 OUR FILMS, THEIR FILMS

A collection of essays by one of the world's great filmmakers, dating back to his early days as a film buff. The late Satyajit Ray, who received a Lifetime Achievement Award from the American Academy of Motion Picture Arts and Sciences in 1991, was easily the finest director ever produced by the endlessly prolific Indian film industry. Unlike the majority of his colleagues, he worked in Bengali rather than Hindi (the dominant language of his country), and he made quietly intelligent, liberal humanist films rather than raucous four-hour musicals, the popular staple. This collection of his occasional writings on Indian and foreign films, published in India in 1976, reflects his humanist concerns. In the course of such essays as ``What Is Wrong with Indian Films?'' and ``The Odds Against Us,'' he repeatedly argues for a cinema about personal problems and large issues, a cinema that is perhaps a little too content-based for the tastes of many critics. The pieces, which date from 1948 to 1974, include several lovely reminiscences and journal excerpts from his filmmaking days; in fact, the best material describes working and traveling at home and abroad. Unfortunately, the book and film reviews that make up the bulk of the volume are disappointingly ordinary; he has little new to say about Akira Kurosawa, John Ford, or the other directors he admires. On occasion, Ray will rise up in a manifesto-like tone, urging Indian filmmakers to draw on their own social reality rather than following foreign models, however admirable. At those moments, his prose catches fire again. Rather than issuing this collection of often indifferent material, Hyperion would have done a greater service to Ray's memory by publishing more of his working journals or reminiscences.