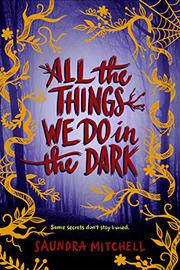 ALL THE THINGS WE DO IN THE DARK

A teen loner grapples with buried demons as she stumbles on someone else’s secret in the woods.

In her latest novel, Mitchell (The Prom, 2019, etc.) again explores the sexual awakening of adolescent identities—this time against the backdrop of childhood sexual assault. Though hesitant to open up to anyone apart from her best friend, Syd, 17-year-old Ava Parkhurst reveals early on that she was raped at age 9 and visibly scarred for life when her attacker traced “a razor blade finger” down her cheek. As if Ava, a good student who strives to live in the present and not fixate on past trauma, doesn’t have enough challenges—Syd is keeping secrets from her; her father has moved out, leaving her and her mother on their own; and, for the first time, she’s finding herself physically attracted to the daughter of the policeman who, years before, handled her assault case—a walk in the woods one snowy Maine night leads to a harrowing discovery that dangerously tests the confines of Ava’s carefully guarded world. Mitchell’s roller-coaster confessional narrative runs the gamut from teen melodrama between friends and the throes of first love to reckoning with guarded secrets and the psychological fallout from astoundingly brutal acts. Most characters default to white; Ava's love interest is biracial (white Jewish and Korean).