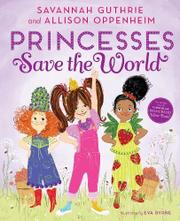 PRINCESSES SAVE THE WORLD

Princesses reintroduce honeybees to a place that needs them.

While this sequel to Princesses Wear Pants (2017) is sure to generate buzz due to author Guthrie’s celebrity, it’s every bit as lackluster as its predecessor. Stilted, forced rhyme tells a convoluted tale of Princess Penelope Pineapple’s efforts to bring honeybees to Princess Sabrina Strawberry’s kingdom (the former girl is depicted as white, the latter as black). The text never explains how the Strawberry Kingdom lost its pollinators, and the story presents the crisis as limited to a gardening problem (how will they make smoothies?), while the solution to the smoothie catastrophe is merely a matter of moving some of Penelope’s bees there. A multiracial cast of princesses descends and concocts a perfume of sorts to lure the bees, whose numbers are oddly small in the digital illustrations. Once they successfully pollinate the flora, a year passes and the princesses have a tea party with fruit pies. Throughout, Byrne’s uninspired digital illustrations vary little in their visual perspective, resulting in a dull presentation of the redundant visual narrative. To make this poor book even worse, the bland three-paragraph backmatter note about the current crisis in the honeybee population offers little substance and no resources beyond advice to “ask your teacher or a local librarian to direct you to some books or online resources about honeybees.”