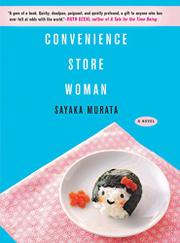 A sly take on modern work culture and social conformism, told through one woman’s 18-year tenure as a convenience store employee.

Keiko Furukura, a 36-year-old resident of Tokyo, is so finely attuned to the daily rhythms of Hiiromachi Station Smile Mart—where she’s worked since age 18—that she’s nearly become one with the store. From the nails she fastidiously trims to better work the cash register to her zeal in greeting customers with store manual–approved phrases to her preternatural awareness of its subtle signals—the clink of jangling coins, the rattle of a plastic water bottle—the store has both formed her and provided a purpose. And for someone who’s never fully grasped the rules governing social interactions, she finds a ready-made set of behaviors and speech patterns by copying her fellow employees. But when her younger sister has a baby, questions surrounding her atypical lifestyle intensify. Why hasn’t she married and had children or pursued a more high-flying career? Keiko recognizes society expects her to choose one or the other, though she’s not quite sure why. When Shiraha—a “dead-ender” in his mid-30s who decries the rigid gender rules structuring society—begins working at the store, Keiko must decide how much she’s willing to give up to please others and adhere to entrenched expectations. Murata provides deceptively sharp commentary on the narrow social slots people—particularly women—are expected to occupy and how those who deviate can inspire bafflement, fear, or anger in others. Indeed, it’s often more interesting to observe surrounding characters’ reactions to Keiko than her own, sometimes leaving the protagonist as a kind of prop. Still, Murata skillfully navigates the line between the book’s wry and weighty concerns and ensures readers will never conceive of the “pristine aquarium” of a convenience store in quite the same way.