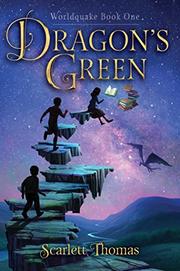 From the Worldquake series, volume 1

This series opener introduces “unprepossessing eleven-year-old” Effie Truelove and her classmates at Tusitala School for the Gifted, Troubled and Strange who discover their magical powers trying to rescue some special books.

Living in the post-worldquake era, white Effie hangs out with her grandfather Griffin Truelove, a scholar of magic, who recently started introducing her to “magical thinking.” Close to death, Griffin leaves Effie a ring, his magical objects, and his library, warning her to protect the books, find Dragon’s Green, and stop the Diberi. Effie’s clueless, but wearing Griffin’s ring gives her unusual strength. Outraged when her father sells Griffin’s library to a sinister book dealer, Effie salvages a book called Dragon’s Green, which literally transports her to the Otherworld, where she learns she’s a True Hero. Determined to save the books, Effie enlists four of her classmates after empowering each with one of Griffin’s magical objects, unleashing their skills as mage, warrior, healer, and witch. In vivid, inviting prose, Thomas deftly evokes an original, intriguing post-technological Earth looming with evil where “books are magic” and memorable misfits become heroes.