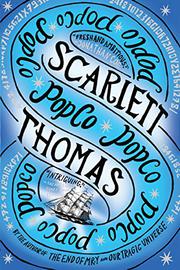 The author of the agreeable but aimless Going Out (2004) finds a sense of direction in this ambitious novel, which quietly but scathingly critiques consumerist society.

Narrator Alice Butler, 29, invents new products for PopCo, a global toy company that sells “the things kids want”—or rather, creates those wants through such sinister marketing tactics as fake websites with fake kids “discovering” various PopCo products. Alice is mildly alienated by this as she heads to the company’s annual brainstorming session at its luxurious “Thought Camp” in Devon. But over the course of her stay, childhood memories come flooding back to reveal how far she’s strayed from the ideals of the grandparents who raised her after her mother died and her father vanished. Both were ace mathematicians and cryptographers: Her grandmother worked at Bletchley Park on cracking the Enigma code; her grandfather deciphered a manuscript that led to buried treasure, but refused to make use of it because the treasure lay in a wildlife preserve. He left the secret to Alice, who at “Thought Camp” finds herself increasingly repulsed by the shallow values of most of her fellow employees, who think that “no dress code, no rules and no set working hours” means they’re free, when in fact they’re as trapped as the workers who actually produce Popco’s stuff in dangerous Third World factories. Thomas passes along a lot of surprisingly interesting information about math and cryptography, plus some highly creepy material on toy marketing, as she connects her heroine with fellow rebels and suggests an alternative to mindlessly feeding the corporate desire machine. The conclusion may not be terribly plausible, but it provides a pleasing happy ending for morose but oddly lovable Alice—and a form of revolt that suits her wised-up, yet not entirely cynical, generation. Thomas has always been a sharp observer and deft creator of character; it’s a pleasure to see those skills employed in the context of a strong plot and stronger point of view.

Thought-provoking fiction for the Digital Age.