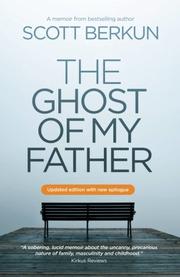 THE GHOST OF MY FATHER

In Berkun’s (The Year Without Pants, 2013, etc.) new memoir, a broken family in the New York metropolitan area struggles to overcome their limitations.

If there’s a keyword that unlocks Berkun’s portrait of his socially impaired clan, it’s memory. Admittedly, this isn’t an unusual observation for a memoir. Nonetheless, Berkun’s childhood recollection of his mother cleaning out her husband Howard’s car, only to discover “tickets to a movie she’d never seen,” is an affecting image of abandonment and lost innocence. “No one recalls what the movie was,” Berkun writes, “but it’s strangely important to me now.” Throughout this memoir, the 42-year-old author tells of how he’s still haunted by his childhood’s lack of stability or certainty, particularly regarding his parents’ on-again, off-again relationship. Starting at an early age, he says, he was overwhelmed by his father’s imperfections, such as his tendency “to deal privately with his wounds, to put himself first, and to deny and repress the expression of love” toward his wife and children, including the author’s older siblings. Berkun tells of how his father became involved in a second affair at the age of 70, three decades after his initial infidelity, and of how his own sad memories of youth rose again, “like the ghosts of sad creatures that died long ago, haunting me because they want to find peace but can’t.” The author’s prose style is compelling, due in part to his interest in classical mythology and modern popular culture. After explaining that his anger toward his father came from the fact that Howard never made “an attempt to explain himself,” Berkun reminisces about his first exposure to the movie Star Wars (1977) and explores the shared history of the “misunderstood monster” between Darth Vader, Dr. Frankenstein, Greek mythology and Aesop’s fables. As the story of a father who came of age in the 1970s and ’80s, Berkun’s memoir is ideally suited to an audience that’s similarly concerned with the challenges of adulthood and parenthood in the 21st century.

A sobering, lucid memoir about the uncanny, precarious nature of family, masculinity and childhood.