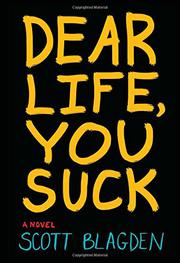 Seventeen-year-old Cricket Cherpin (yes, his real name) has lived in a Catholic orphanage in Maine since he was 8 and his little brother died. He has a deep facial scar, the legacy of a prostitute mother and a drug-dealing father, and he hides an even deeper, internal scar through constant fighting and irreverence for authority (he’s not afraid to tell it like it is), religion (he hates Jesus), language (f-bombs land) and sex (he thinks about it a lot). Although Cricket is deemed a bully, his punches keep younger boys and school nerds safe. In this debut, his first-person narration, loaded with biting sarcasm and never-ending nicknames for his oppressors, reveals the push and pull of his soul. Cricket loves old movies, feels comfortable with his feminine side and relishes telling stories to the younger orphans, yet emotions surrounding a potential romance, guilt over his brother’s death and an uncertain future make him ready to jump off the local cliffs. While a slow build of hints to Cricket’s past helps explain his current state, a sudden chain of events forces him to confront his violence, relationships and the direction of his life.

Only fellow classic-movie and -television buffs will understand all of the teen’s references, but all readers will appreciate Cricket’s complex, lovable character and the strong adults who nourish it.