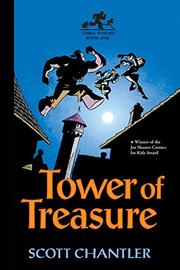 From the Three Thieves series, volume 1

In this lively opener to the Three Thieves series, young gymnast Dessa, searching for her kidnapped twin brother, joins two fellow circus performers in an attempted heist, a prison escape and a merry chase through and out of the fortress of Kingsbridge. Along the way she spots the kidnapper, who escapes her and so sets up a continuing plotline. Artfully using exchanged glances and wordless panels to add both humor and emotional depth, Chantler introduces a likable trio of thieves in a medieval-ish setting and throws in several worthy adversaries—including an intelligent, conflicted guard captain who spends much of the tale hot on their trail. He further spices things up by rendering Dessa's companions as nonhuman: Topper, "the greatest thief in North Huntington," is a small, blue, irascible gnome-like creature, and Fisk is a large, slow, lavender troll-like thing with a hairstyle ever-so-slightly reminiscent of the Human Torch's. The banter among the three is sharp and witty and balances the visual pacing effortlessly. Fast paced, cleanly illustrated, great fun. (Graphic fantasy. 10-12)