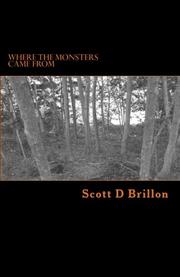 WHERE THE MONSTERS CAME FROM

This present-day tale offers the grotesque, the depressing, the violent…and then there’s the monster.

Novelist Brillon (The Sound of Falling, 2013) is back—with teens in the throes of being teens. As if life were not hard enough, there is a monster involved, and Jimmy Jervais is eager to show it off. For this, he gathers three kids—Donny Winters, a decent, popular kid at Toreyville Junior High; Corey Reese, a psychopath-in-training; and the loner Quentin Gagnon. Corey and Jimmy and Quentin come from troubled homes or no homes at all. The monster is right from central casting, a nightmare creature complete with glowing red eyes. Jimmy leads them to a clearing in the Big Halo Woods and the hole where he has imprisoned the monster. They feed it squirrels, which it snatches with one huge wrinkled paw and pulls back into the hole. So an uneasy bond is formed—Donny, Corey, and Quentin were never really buddies, and they barely remember Jimmy—and we can be sure that no good will follow. The monster can deliver rough justice, but he isn’t finicky either. The clueless town fathers actually hit upon launching an annual Wumpus fest, to draw in tourists—yes, there is grim comedy at times—but the boys know how real and awful the monster is and that he will haunt them forever. Where did the monster actually come from? And who is Jimmy, really? There is a clue, maybe, on the very last page, but neither we nor Donny nor Quentin will ever truly know, which is the book’s obscene charm. Perhaps it was teen angst raised to the nth power (à la Stephen King’s Carrie). Brillon knows teenagers and their seamy culture. All the details are wonderfully observed; some chapters, like the Dantean hell of a clandestine kegger party, are painfully unforgettable.

B. HORROR
by Wendell Mayo
Indie