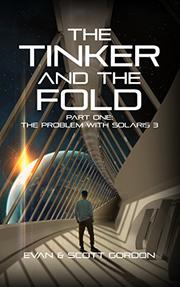 The Tinker and The Fold

From the Problem with Solaris 3 series, volume 1

by Scott Gordon and Evan Gordon

Jett, a California kid, invents a gadget that could propel an unready mankind far into space, and he’s abducted by powerful, cautious aliens.

Scott and Evan Gordon, a father-and-son sci-fi/YA writing team, offer a rambunctious launch to a new series. In southern California in the year 2028, adolescent inventor Jett Javelin, son of a theoretical physicist, takes cues from his mom’s research to create the “quantum swapper,” a DIY teleportation device capable of materializing individuals light-years away. Its use instantly makes Earth a high priority for the judgment of the Fold, a federation made up of 1,756,234 intelligent, peace-loving (and vegan) alien civilizations. The Fold takes action whenever a nonbeneficial race discovers interstellar travel. It turns out the Fold, via their chief regulators, the Aaptuuans (the variety known to UFO enthusiasts as flying-saucer “little greys”), long ago seeded throughout the universe the laws known here as the Ten Commandments. Any spacefaring civilization that violates these laws in any way—even killing and eating animals for food—is subjected to “neutralization,” doomed to likely extinction by having all electronic technology deactivated. After the Aaptuuans abduct Jett along with his invention, his behavior (and whether his people find his records and can duplicate the quantum swapper) will determine Earth’s fate. Luckily, Jett hooks up with the tentacled Tii-Eldii, a refugee from a previous Aaptuunan neutralization, and the chase is on. The fleet narrative never has any dead spots and boasts a clever range of aliens of all shapes, sizes, and appendages. It also has just the right balance of tongue-in-cheek (when a life form happens to have a tongue or a cheek) and serious elements when it comes to pondering moral issues and dilemmas. There is, naturally, a cliffhanger finale to draw readers into the next installment.

Fun YA galactic romp that is not without its thoughtful side.