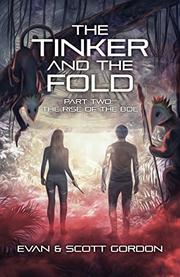 THE TINKER AND THE FOLD

Part Two: The Rise of the Boe

by Scott Gordon with Evan Gordon

An adolescent inventor tries to rescue his brother from a power-mad alien, while Earth faces a controlled existence as a member of a galactic association.

In this sequel, the Gordons (The Tinker and The Fold, 2015), a father-and-son YA sci-fi writing team, continue the breathless antics of the Javelins, a California household of scientific and alpha types in 2030. Jett Javelin Jr., aka “the Tinker,” became the most famous kid on Earth for creating the “quantum swapper,” a teleportation device that gained humanity an enrollment in The Fold, a co-op of thousands of spacefaring worlds. The dwarfish, officious Aaptuuans, who oversee The Fold, enforce its strict codes against violence and killing (the basis for the biblical Ten Commandments). Because Jett Javelin Sr. was a Gulf War veteran, he joins millions of human “murderers” exiled for reconditioning on Pluto. Jett Jr., in a rescue-mission attempt using the quantum swapper, accidentally scrambles his subatomic structure. Result: he acquires shape-shifting powers. His twin brother, Jack, is taken prisoner by the treacherous Hazborg, a reptile-eel monster. The Aaptuuans believed they had reformed the creature, but, with stolen technology, he masquerades as a god among the Boe, a primitive primate/feline tribe he plans to make into an empire. The Aaptuuans’ nonviolent solution sends super-charged Jett Jr. (plus a girlfriend and an AI) to the planet as a rival god to dethrone the villain. Amid the high-speed stuff is the back story of Earth’s conformity to Fold values, ready or not. Ethics, peace, and a vegan diet are coerced by the aliens—sometimes using methods of behavioral control not unlike those in A Clockwork Orange. A reader has a queasy feeling the authors don’t exactly object (well, Robert A. Heinlein preached some peculiar sermons, too), and this intriguing plot thread finally intersects with the frothier one in the cliffhanger ending. At one point, there’s a quick (nothing in the narrative moves slowly) pop-culture reference contrasting two Hollywood director-fantasists: action addict Michael Bay and the more thoughtful and complicated J.J. Abrams. The saga itself seems torn between which role model to follow—big ideas or just snazzy FX? But the nimble style is disarming enough to curb cynicism about the elastic science and Tom Swift-on-microchips tone. The sense of humor keeps things more in a comedic orbit than a mission of gravity.

A fast-paced popcorn space opera with occasional hints of depth—easily digestible like its predecessor.