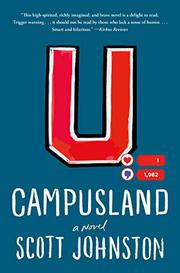 Been to college lately? Here it is in all its glory, from the trigger warnings and the bias response teams to the hookups and the hashtags, served with plenty of kombucha and seasonally correct vegan stew.

Johnston's debut skewers life at Devon University in Havenport, a body double for Yale, from the buildings and clubs on campus to the white clam pizza in New Haven, including a nod to the 2015 Halloween-costume dust-up. Our hero is Ephraim Russell, a good-looking young white man and professor of English originally from a peanut farm in Alabama who was born to teach 19th-century literature, who "couldn't imagine a place he'd rather be" than Devon, who has a 4.4 out of 5 on RateMyProfessor.com, rare indeed. He has a beautiful African American girlfriend named D'Arcy, and he is up for tenure this year—life could not be better. But the fall semester will bring Eph low. Among the characters who play a role in his downfall are Lulu, a gorgeous, rich, and utterly cynical Manhattan freshman; Red, a seventh-year student not currently enrolled but leading the Progressive Students Alliance; and Milton Strauss, the popular 17th president of the university. The trouble unfolds in short chapters and articles from the Devon Daily, and, in more ways than one, it all starts with Mark Twain. This high-spirited, richly imagined, and brave novel is a delight to read. Here's a trigger warning, though: Since its relentless mockery of the campus political climate never actually acknowledges the reality of racism and sexual violence, it should not be read by those who lack a sense of humor. Also, the ending seems to suggest that the solution is to go back to the idyllic way things used be. That can't be right. But it's a satire! The whole point is to lighten up.